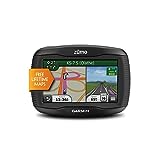 Garmin Zumo 390LM is faster, more responsive, and has a new look as well as some interesting new features. Considered as a whole, the changes introduced with the 390LM would appear to be aimed at creating a more simplified and user friendly product.

An upgraded version of this item is now available. Click here to read the Garmin Zumo 395LM review.

As one of two devices in the 300 series, the other being the base model 350LM, the 390LM was the first new model to be released in several years, not as a replacement but as an alternative to the 660LM, which is, however, likely nearing the end of its long production run. At first glance, the most obvious difference

between the two models is in basic outline, the rounded lines of the 390LM in stark contrast to the rectangular shape of the 660LM. While sharing the same 4.3” screen size, it presents a substantially slimmer profile and is the lighter of the two models. It is also distinguished by the ribbed black-rubber coating applied to the case, making it more durable and less prone to chips and scratches.

The wiring harness is another example of the streamlined approach adopted by Garmin with the introduction of this model. The wiring harness for the 660LM includes multiple wires for power, USB, microphone, and headphones, whereas the 390LM has easily accessible, built-in connections for these (except microphone), and a power supply cable consisting of just 2 wires.

In developing the 390LM, it appears Garmin has narrowed its focus by concentrating on improving core functions while at the same time eliminating some non-essential ones offered on previous models. The user interface also benefits from this approach and features intuitively designed, and highly customizable layouts for the various menus and map views. The 390LM’s interface is built around the “Where To?” set of functions which organizes potential destinations according to different categories, including a wide range of points of interest, and address. These can then be searched on the basis of their location, either your current location, or a different city. Apps are conveniently grouped together on a separate screen and include some new features such as TracBack and a service history log. The former is particularly useful if you become lost or disorientated while riding off-road and can direct you back to your exact starting point while the latter allows you to record details of your bike’s maintenance history.

Although designed primarily as a motorcycle navigator, the 390LM is equally at home in your car having internal speakers for spoken directions, and comes equipped with an automotive mount and power cable. When in motorcycle mode the display changes to a more glove friendly version with larger keys and the screen has been especially designed for sunlit conditions. While not perfect, this last claim made with regard to screen readability is closer to the mark than in previous models which are sometimes difficult to read when viewing in bright sunlight.

At up to 7 hours, battery life is second only to Garmin’s entry level model, the Zumo 220, and 1 hour more than the TomTom Rider. Unlike earlier models, the 390LM is a sealed unit with a non-replaceable battery allowing for a more efficient and compact design. While there are those who will, no doubt, lament the lack of a replaceable battery, it could be argued that, on balance, the advantages do not work out so decisively in its favor as might be expected. As with all aspects of technology, batteries undergo a continuous process of improvement and the most recent examples can reasonably be expected to last somewhere close to the life of the devices which they power.

The proliferation of smart phones with a wide range of capabilities has meant that features such as MP3 players have become, to some extent at least, redundant on dedicated GPS devices. This is especially true when you consider most smart phones can perform those same functions better, and with the increasing number of apps offering free GPS navigation, companies like Garmin have little choice but to concentrate on their key strengths in order to stay relevant.

In keeping with the strategy outlined above, the 390LM has no MP3 player or picture viewer, both of which are found on the 660LM and 665LM. There is, however, a microSD card slot allowing for additional storage of routes, up to 100 of which can be stored in the on-board memory. The device can be paired via bluetooth with a compatible cell phone and headset/helmet for hands-free calling, and for listening to spoken directions. Although it’s true most modern GPS systems do have bluetooth, not all offer the convenience of hands-free calling, something worth considering when choosing a device. There are numerous other features, the most noteworthy of these being an innovative tire pressure monitoring system, Exit Services, Lane Assist, and Junction View, and, as a bonus, Garmin offers free lifetime map updates with every unit sold.

Although still expensive, the 390LM is positioned towards the lower end of the price scale relative to the other models in the Garmin Zumo series, and has a good number of useful features. This, together with the improved performance and user interface, make it an excellent choice for those seeking a dedicated motorcycle GPS.

Check current price on Amazon.com
Bestmotorcyclegpsguide.net is a participant in the Amazon Services LLC Associates Program, an affiliate advertising program designed to provide a means for sites to earn advertising fees by advertising and linking to Amazon.com, Amazon.co.uk, Amazon.ca and other Amazon stores worldwide.
Share
Tweet
Pin